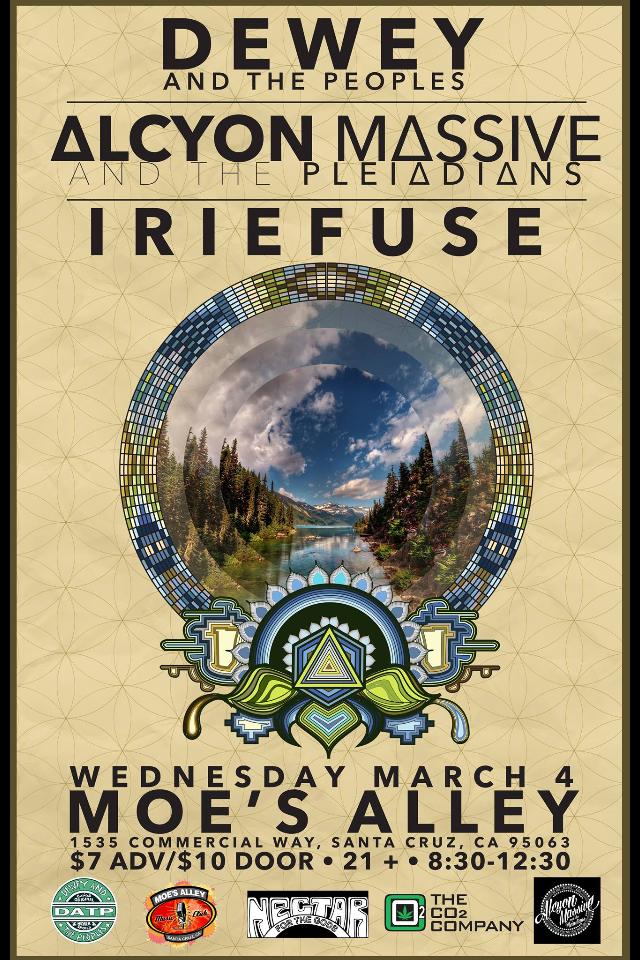 ABOUT DEWEY
San Francisco, CA brings you Dewey and the Peoples
Hard hitting Reggae/Hip-Hop/Alternative.  Dewey and the Peoples is a five-piece music group reigning from the San Francisco Bay Area. The basis of their tunes is a rootsy reggae feel while incorporating R&B/Pop/Hip Hop . The rhythm section of the band comes from a background of jazz, while the guitar stems from a more ska/punk influence. Dewey, the poster boy, vocalist and band leader keeps the vibes with his lyrics and songwriting along with his fellow frontman Ras Beeken Dan of (Jah Horns & Pato Banton & the Now Generation) on saxophone. Many different factors including love for life, people, and music make Dewey and the Peoples a unique group that is continuing to blow minds daily.ABOUT ALCYON
Alcyon Massive is an emerging evolutionary musician devoted to helping ‘dream the world awake’ through this spiritual lyrics and signature blend of hip-hop meets reggae.

ABOUT IRIEFUSE
IrieFuse is a collection of long-time friends and fresh talent homegrown in the hills of Marin County, California. Originally formed as Counter Culture in 2011, they hit the scene hard with a flood of live shows and numerous festival appearances – refusing to let their music go unheard.

Performing as IrieFuse since early 2013, they have successfully toured the US West Coast, winning over the hearts of promoters and new fans at every stop. Their aggressive performance schedule and alluring energy has kept them at #1 spot on the local reggae charts. They have directly supported artists such as Alborosie, The English Beat, Richie Spice, Junior Kelly, Anthony B, Junior Ried and Fortunate Youth.  They are also currently the US backing band for 3x award-winning Belizian reggae artist, Ras Indio.

The grooves of IrieFuse are influenced by bands such as Sublime, Rebelution, Iration, Tribal Seeds, Fortunate Youth and of course, the reggae legends Bob Marley, Peter Tosh and more.  Their rock pace and vivacious sentiments cross pollinate into a strongly motivated narration of life lived in the active now.

Their debut EP, Sun is Rising, released July 26, 2013 and is available now on all major online music retailers. They are currently recording their freshman full-length album, “Give & Get Back”