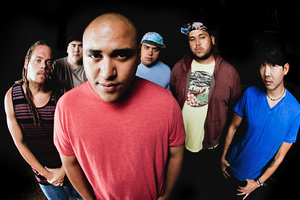 THE GREEN
LINKS
The Green’s latest album, Hawai’i ’13, opens with a chant.

“From the times of ancient Hawai’i and even up to present day, chanting has been a part of our culture,” says JP Kennedy, guitarist, vocalist, and one of the band’s five songwriters. “It’s a way to start something important. When we chant, we ask for blessings, knowledge, and guidance so that we can be ‘pono’ or righteous in whatever we do.”

The chant of “He Mele No Ku’u Hawai’i” prepares the album’s listener as much as the band. Hawai’i ’13 dances through roots reggae, soul, and R&B. The album charts a journey through Hawaiian life and music in 2013, reflecting The Green’s musical upbringing as much as their vision for the future of Hawai’i and its musical output. Following The Green’s usual modus operandi, the album was written by the group’s five separate songwriters (Kennedy, guitarist-vocalist Zion Thompson, vocalist Caleb Keolanui, keyboardist-vocalist Ikaika Antone, and bassist/multi-instrumentalist Brad Watanabe); the band’s four singers (Kennedy, Thompson, Keolanui and Antone) take turns on lead vocals, sometimes trading off with each other within a song. Once you listen to this record, there is little doubt that the chant served its purpose, as the results show the band has been righteous in their hard work.

The Green formed on O’ahu, Hawai’i, in 2009. The group began as a vehicle for six different members of Hawai’i’s tight-knit music scene to record a few songs and have a bit of fun along the way. Their self-titled debut album, released in 2010, earned both critical and commercial acclaim, and was awarded iTunes Best Reggae Album of the Year.

Afterwards, the band jumped on a plane to the mainland and started a heavy touring cycle. On the strength of their debut album, The Green struck a record deal with ground-breaking independent reggae label Easy Star Records to record their sophomore album, Ways & Means. Ways & Means hit #1 on the iTunes and Billboard Reggae charts and the band embarked on more intense touring; supporting acts like Rebelution, Iration, SOJA and Damian Marley. They also played at acclaimed festivals including Vans Warped Tour, Wakarusa, Sierra Nevada World Music Festival and California Roots Festival.

Despite all the time spent away from home, Hawai’i never left the band’s day-to-day life on the road. In almost every state, the band met Hawaiian ex-pats, driven away from their home state for reasons both economic and social. The Green’s concerts became a place where Hawaiian natives could gather and for one night, share a bit of Aloha spirit from the Pacific islands they call home.

“Hawaiians living on the mainland will come to our shows and say ‘I haven’t been home in years! You remind me so much of home,'” says multi-instrumentalist-songwriter Brad “BW” Watanabe. “I feel like that’s our service in some way.”

In early 2013, The Green retreated to Hurley Studios in Costa Mesa, CA, to record their third album with Danny Kalb (Ben Harper, Beck, Jack Johnson), the band’s first outside producer/engineer, at the helm. In addition, the group brought in Joe Tomino, drummer from Dub Trio (who also double as Matisyahu’s backing band), to handle the drums for the sessions.

“We were worried about it because we always recorded everything ourselves,” Kennedy admits. “But when we added Danny Kalb to the mix, and Joe on the drums, they just brought so much to the sound of the songs.”

The addition of an outside ear helped sharpen the band’s direction, and the 13 tracks on Hawai’i ’13 sound focused and pointed, despite the group’s many different songwriters. “All of us contribute to the creation of a song,” says guitarist-vocalist Zion Thompson, “whether it’s lyrics or music, it’s always collaborative.”

“Everyone respects each other’s opinions,” Thompson continues. “Everyone has their place and everyone makes room for it to work.”

The Green hit all the right notes with their first two albums, but the band members are still coming to grips with the personal toll of success. Bands from the mainland may be used to touring from state to state, but that’s no small step for a group from a small island in the South Pacific. “While I face a dozen spotlights, you’re crying at home,” goes “Something About It,” one of the lead singles from Hawai’i ’13. “Sit by the phone. You think I’m alone, wishing I could be there. But the music’s got me traveling on.”

The Green struck the reggae community hard with their debut in 2010. Their sophomore LP Ways & Means solidified their status as a force in reggae music. With Hawai’i ’13, the band aims higher. The album collects 13 stellar tracks by a group with an insatiable urge to push their music onto the global stage. Some songs punch and some songs sway, but ultimately they all blend to form a new shade of Green.