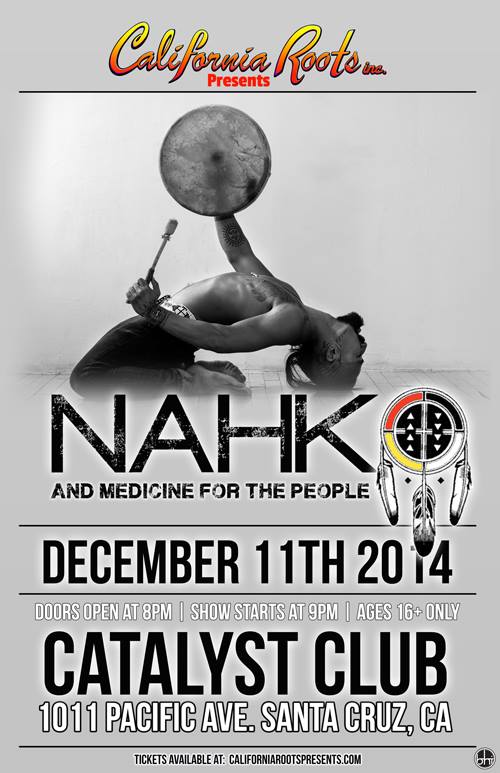 NAHKO AND MEDICINE FOR THE PEOPLE

This event is 16 and over

NAHKO AND MEDICINE FOR THE PEOPLE

Oregon-native Nahko, born a mix of Apache, Puerto Rican, and Filipino cultures and adopted into an American family, suffered an identity crisis from an early age. But the unifying power of music entered his life as a healing remedy, when he took up the piano at age six. Armed with his newfound talent, he set out to bridge the cultural gaps dividing his own psyche and began producing a public, musical journal of his journey toward personal, spiritual, and communal healing.From his hometown of Portland to the shores of Hawaii or Bali, wherever he has traveled, Nahko is joined by a tribe of culturally alienated truth seekers for whom Nahko’s story resonates with their own, and who find redemption in his voice, guitar, flute, and drum. Whether solo or with the dynamic group of musical troubadours known as “Medicine for the People,” Nahko delivers a soulful dose of curative vibrations that moves audiences to dance, laugh, and cry. His ‘spirited redemption music’ lays bear the scars of cultural wounds, environmental wrongs, and social injustices. His lyrics bear the burden of heavy messages, but the load is lightened by agile melodies and driving rhythms that coerce all who bear witness into spirited, purifying, movement. His humor disarms, and his lyrical stories open listeners to the power of “Real Talk Music”—songs that reveal an honesty and depth so raw, it inspires an internal revival that echoes out into the world. Sometimes exuberant, sometimes savage, but always transformational, Nahko makes the movement move.
DUSTIN THOMAS

Big hair, big smiles, and a whole lot of love: International globe-trotter Dustin Thomas is making waves from Australia to Moscow with his infectious blend of beat-box/soul folk. Armed with a voice, a guitar and universal anthems of faith, love, and war; this young artist continues to inspire hearts around the world on his mission of music, joy, and peace.Dustin is currently touring globally and nationwide, both as a solo-artist and in collaboration with Nahko and Medicine For The People.